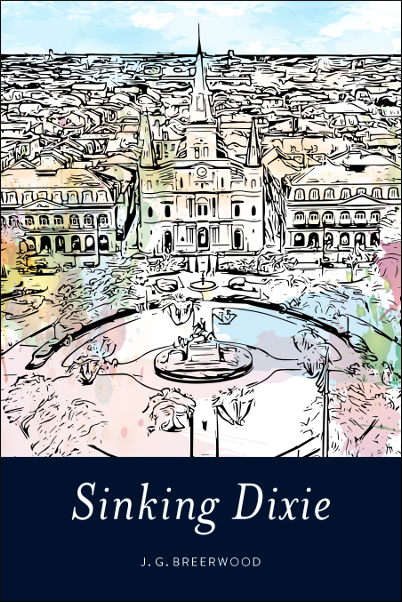 After Hurricane Beckham decimated New Orleans and rerouted the Mississippi River, the government abandoned the iconic city that, after decades of coastal erosion, would soon be a waterfront city. Ambitious developers seeking to rebuild the area as a beach resort destination, ruthless, pirates, ravenous animals, armed clergy, gangs, and occupying mercenaries are only some of the obstacles in the way of residents, like Ridge and Mira, who return home to rebuild their city’s ruins. Ridge (a bartender) and Mira (a teacher) must reconcile their troubled past together as they persevere to rebuild their beloved city. Mira is devoted to her students and the city’s culture, no matter if the district is overseen by a tyrannical captain or overhauled by the Catholic Church. Ridge, hungry and desperate, remains loyal to a mysterious grocer, not giving in to the Manchac pirates…for now.

“JG Breerwood’s SINKING DIXIE is a tough-minded tale of survival, one that embraces the complex challenges of mourning what we have lost while at the same time fighting for what we still have. This novel is also a compelling reminder that whether they rest atop granite or swampgrass, our great cities, like our best lives, are really built on hope.” – Bill Loehfelm (author of The Devil’s Muse, Let the Devil Out, and Doing the Devil’s Work)