When it comes to writing, not everything comes easily. No matter how creatively your quirky mind works or quickly your fingertips type, you need a little help from time to time. Generating the initial thoughts seems effortless. Stephen King says in On Writing that “good story ideas seem to come quite literally from nowhere, sailing at your right out of the empty sky: two previously unrelated ideas come together and make something new under the sun. Your job isn’t to find the ideas but to recognize them when they show up” (25). As true as that statement is, transforming those ideas into a completed draft does require plenty of self-scrutiny and emotional exhaustion. The creative process is like building a fire. Perhaps the “two unrelated ideas” that King mentions are paper and kindling so that they only become fire until a spark ignites both of them? But also like a fire, the writer’s intuition needs to be fed or it will die, and hopefully he or she intends to warm others or to cook something up and not to burn a whole forest down with their words. Many things keep writers writing: coffee, tobacco, coffee, beer, pot, a window view, music, and…yes more coffee please. Everyone’s different, of course. Mark Twain had to stick himself in a corner away from a window and his billiard table in order to get anything done while smoking an ungodly amount of cigars. Or, a godly amount, depending on your preference/tolerance of premium cigars. It’s always a different combination of things, depending on the time of day. Coffee in the morning, beer or rum in the evening, and a cigar in private or public (when permissible).

While all of these things are variable, music is a constant in this equation. Certainly, the genres and artists are interchangeable depending on the mood I wish to inject in the pages. There’s something strange about how particular bands or vocalists evoke a unique artistic fervor within us. No one can exude an angsty splendor better than Billy Corgan of Smashing Pumpkins or a beautiful melancholy better than Ashley Monroe. The recently deceased Cranberries’ front woman, Dolores O’Riordan, always propelled a slightly sorrowful yet persistent and hopeful human spirit. Her voice helped me, as weird as it sounds, get into the heads of the female characters I had created. And, that’s what I needed for writing Mira Roche, a main protagonist in my novel (currently unpublished). I needed a steadfast, strong female character that possessed a focused strength to distract from her tragic surroundings in order to fight for her students’ futures. But it wasn’t just Mira. I have been listening to the Cranberries for writing inspiration as far back as college when I first attempted to write somewhat believable female characters. Whenever I wanted to tap into my female characters’ minds, I could always go back to the Cranberries. The music was always there, and yet, perhaps it always will be, assuming that the internet and digital music technology withstand the wayward world. 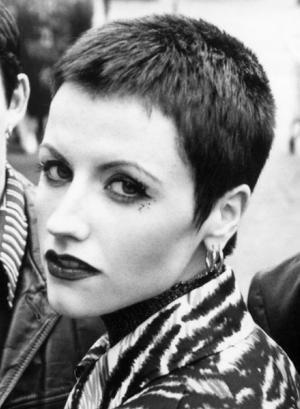 But Dolores O’Riordan won’t be. It’s almost like she wasn’t ever a person to begin with, just another name or voice in history.  Another coin lost at the bottom of a fountain of hundreds of stories untold and wishes ungranted. It is sad that not only another talented artist met an early end, but also that I did not even know her name until I read that she had died unexpectedly. Nor did I really care to, it seemed. Sometimes worldwide fame isn’t even enough for us to escape anonymity. Not all creative artists covet fame, but I’ll assert that most, if not all, writers fear nothingness. We create for the sake of our own sanity, sure, but the hope that our labor of love will resonate with someone somewhere somehow. Hundred years from now, I’ll be a happy eternal spirit if two people are talking about my writings on a pair of barstools. Writers don’t fear obscurity; we fear being buried alive in the back boneyards of the Salvation Army.  Though the Cranberries’ music is still quite known; what about Dolores O’Riordan? Is that what we as artists want? To be used simply as a vehicle of entertainment or inspiration, and then be overlooked as an individual?

This band reigned in the 90s, between my ages of 8 and 18 which is the time frame when it’s easy to take everything for granted. Well, as an adult and soon-to-be-father, I know better at least to appreciate the grant and its giver. It will remain unclear how she died until a report releases information on April 3rd. Either way, her words boosted the creation of many of other words that she will never read nor even know of.  But, for what it’s worth, thank you, Dolores. It is quite possible that certain dialogue sequences or plot points would not exist in Pro Bono Publico (working title) without your music along the way.

There’s no stretch of the imagination to think that her Irish roots fostered her voice’s angry, aspirational essence, which will always have a place in the world.  Perhaps we need it more than ever. In response to your questioning whether anyone cares in “Ode to My Family”: Yes, thank you, and rest well.